Pulling Together to Get to the Gold

Pulling Together to Get to the Gold

Watching the parade of Olympic and Paralympic athletes through central London today, I was reminded, all over again, what a fantastic success the summer’s events had been. For instance, did you see the rowing? That fantastic Men’s Eights final, with the Germans muscling their way to the gold and Canada surging past our valiant Team GB and gaining on the Germans with every stroke over the last few heart-stopping seconds? No? Shame. It was really exciting. And there were lessons to be learned that go far beyond Olympic rowing.

That final reminded me of the daughter of one of our neighbors, who came home from a pretty serious junior rowing meet where she’d gone to support some rowing friends. ‘How did it go?’ her father asked.

‘Not so good,’ she said. ‘The others had eight people rowing and one little one at the back shouting. Our guys looked like they had one rowing and eight shouting. We didn’t win.’

As a recipe for not winning, eight shouters and one rower is close to infallible.

Yet we see something just like that happening all too often as companies face up to the challenge of Magic Quadrant or Wave assessments. 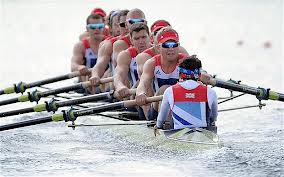 It’s not that the multiple shouters aren’t trying to do their share of rowing. Sometimes they are putting in a lot of effort. But if they’re not listening to one single coordinating voice, it’s easy for them to get their timing all wrong and find themselves pulling in several different directions. And there are always likely to be some individuals who don’t know why they’ve been roped in and just don’t know what they are supposed to be doing.

The cox is the key

The key to a powerful coordinated effort – in business and on the water – is the cox, the designated shouter. In large companies, for assessment response handling, that role will usually be taken by an internal analyst relations specialist, and it’s a function that can call for a lot of skill, tact, and finesse. It tends to bring with it a lot of weighty responsibility and very little power to make things happen.

There is a certain amount of shouting to the rowers that needs to be done. But it can be a delicate position. The cox does not usually have a great deal of authority – certainly not enough to make the assorted rowers, including top executives, listen and do what they’re told.

Compared with the big beasts down the front of the boat, the cox is a lightweight.

Worse still, the cox may be perceived as a dead weight. So there is always the temptation for those who are providing the power to throw the cox overboard if they don’t like what they’re hearing.

Nevertheless, the cox needs to make sure the rowers are all in time and doing the right things the right way. If the assessment process is to reach a successful conclusion, the rowers mustn’t be allowed to slow up, or to start doing their own thing independently.

The evidence and the reasons why

It’s worth remembering that the cox is probably the only person who can see exactly where the whole crew is heading. The rowers may snatch occasional glimpses over their shoulders, but it’s the cox who gets to see the whole picture. And if the rowers turn round, at the end of it all, and discover they are not where they hoped to be, it may well be the cox who gets the blame.

But it’s often not the cox’s fault. To build momentum and eventually get across the line, this boat is going to need two different types of rower.

On the one side, there are the evidence people. They may come from finance, product, operations, or sales, and their job is to provide strong evidence of how well the business has been performing.

On the other side, there is also a need for people who can answer the big questions, the ‘Why?’ questions. ‘Why did the company launch this product/move into this market/acquire that competitor?’ ‘Why are you focusing on the partner channel, rather than direct sales?’ ‘Why did you choose to develop proprietary technology, rather than use a standard approach?’ Even, simply, ‘Why did sales increase this last year?’

These are likely to be key issues for the analyst. Questions like this need to be answered by people with the weight and authority to put across the vision, the passion, and the high-level strategy. These rowers are vital members of the team, too. Without them – with evidence people rowing energetically on one side and no ‘why?’ people digging their oars in on the other – it’s obvious that the boat will just go round in circles.

You can’t steer a raft

The cox’s other nightmares include the boat with effectively no rowers at all. That’s certainly something we’ve seen in the past. When it comes time to start the preparation for a Magic Quadrant assessment, the analyst relations specialist charged with making a success of it looks around and discovers there’s no one truly there to help make it happen. With no effective oarsmen, the boat becomes a raft, and the cox can’t even pretend to steer.

A subtler version of this is the situation where there are plenty of rowers around at certain times, but not necessarily the right people at the right moments. Not everyone needs to be on board all through the race. But the cox needs to be able to count on key people’s presence at crucial points and does not need the added complication of crew members hopping in and out of the boat on a whim.

Whatever status the cox usually holds within the organization, in the build-up to an assessment there has to be the delegated power to get things done and to ask for whatever’s needed, when it’s needed, from everyone from the CEO down. That’s where the need for clarity, tact, determination, and diplomacy comes in. It’s a role that can make reputations very quickly, or break them equally fast.

One of The Skills Connection’s main tasks, when working with large organizations, is mediating between the cox and the company. Another, early on in the process, is teaching the cox how to make his voice heard, without necessarily shouting at full volume.

We have long experience in helping those who have been made responsible for assessment preparations to find the right things to say to prove their worth and to persuade others, throughout the enterprise, that they should pay attention. In that sense, we are like the rowing coach who stands on the bank with the megaphone, helping everyone get the training, preparation, and techniques right for the big event.

When it comes to the crunch, it’s those in the boat, cox and rowers together, whose efforts determine the outcome. Our job, as we see it, is to make sure that boat travels as fast and as far in the right direction as the company’s performance can possibly justify.

Are we on target?   The last thing we want is everyone agreeing with what goes into this blog. After all, if you don’t disagree with some of the points we’ve raised, we’ll be forced to be more and more provocative, and who knows where that will end? So let us have your thoughts. Have you seen the analyst assessment process go wrong because the person charged with making it work did not have the right skills or authority? Have you found your own ways to make sure everyone gets the timing and direction right? Have your say, and send us any practical tips you’ve discovered that we can share with our readers.