Do the analysts still call the shots?

Do the analysts still call the shots?

How much does analyst research – from Gartner, Forrester and all the rest of them – really impact your sales pipeline?

In these days of online peer reviews and social media, do the analysts still influence where the money goes?

There have been plenty of studies into the question of analyst influence, over the years, usually looking at the question from the buyer’s side. But we wanted to get a sense of how things looked from the supplier’s point of view, so we have been conducting a social media survey to capture that perspective.

To do this, we used a simple, single-question poll that asked tech vendors about the effect of analyst research on their sales pipeline. Altogether, 118 people responded – most of them people we’d never been in touch with before – and we’d like to thank them very much for taking the trouble to share their views.

The results of our poll are shown here.

The most striking headlines were the fact that nearly all vendors said they felt the impact of the analysts’ views – and that 14 per cent of those who contacted us (one person in seven) believed an actual majority of deals were guided by the analysts’ work.

In other words, two-thirds of the vendors believed analyst comments were a significant factor where the buying company was a client of the analyst firm. And since the research and analysis firms have more than 16,000 customers, and they are disproportionately weighted towards larger companies, these are very significant figures, representing a lot of buying power and sales worth many millions.

This is interesting, but we believe there’s reason to think our vendor-side respondents are actually underestimating the analysts’ influence – because there is a significant gap between what the vendors report and what the buyers they are selling to say.

The most well-known research on the purchaser side – a 2015 survey by Hill + Knowlton Strategy’s Blanc and Otus subsidiary that examined the views of 800 senior B2B decision makers – famously showed that buyers believed 84 per cent of all major technology purchases had been influenced by the analysts.

That’s a very big number. To achieve this high level of impact, the analysts must be exerting a considerable influence on buyers who are not clients of the research companies, as well as on those who are. They must be having a powerful effect on many buyers who are not entitled to inquiries, who do not buy the analysts’ research and who do not get the opportunity to meet them face to face.

We believe the key factor that’s often underestimated is the influence the analysts exercise indirectly, rather than directly.

The direct influence comes in the form of written research, presentations (at analyst and industry events and webinars) and one-to-one interactions (inquiries, conversations at analyst events and face-to-face meetings at company offices).

But it’s clear that the analysts’ influence is also important in a number of indirect ways. In practice, there are six main channels, as shown in this graphic, through which this indirect influence is brought to bear. 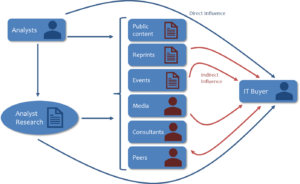 It is easy to underestimate the power of these second-level effects. Buyers may not even be aware of where the views they are hearing originate from. But each of these six channels can exert a significant influence on the eventual purchase decision.

The key point is that the analysts play a number of different roles in the tech industry ecosystem. Directly and indirectly – whether people are conscious of it or not – they influence the vast majority of all major enterprise IT purchasing decisions.

The conclusion for vendors is clear. If you are a company selling technology products or services to enterprises, you need to make sure the relevant analysts get it. You need them to understand your company, recognise where it fits in the market and know exactly when and where buyers should consider your products or services. When it comes to the crunch, the fate of your sales pipeline can be in their hands.