A memory from Joel, our US MD. 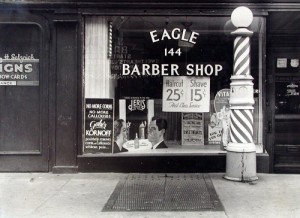 When I was a little kid, I used to ride the bus to my cousins in Flatbush. The bus from Williamsburg, Brooklyn, to Flatbush ran along Lee Avenue, and I used to observe all the local stores and businesses as the bus passed by.

I remember the barber shop on the right side of the street, because it had a big, bold sign.

But it wasn’t the only barber on the block. Across the street was another barber shop. That guy had a sign outside, too.

There are a lot of 25 cent haircuts in our business, too.

They are called ugly draft assessments, and you don’t want to be walking around with people judging you by one of them. If you’re a vendor and an analyst’s draft assessment threatens to make you look less slick and sophisticated than you really are, you need to cross the road.

The way a good analyst relations (AR) professional can go about fixing that bad haircut for you is by paying careful attention to the process of reviewing the draft.

It starts with identifying anything factually incorrect, ambiguous, or open to misinterpretation. It singles out opinions that are not based on facts and any incorrect statements that have crept in as a result of your explanations being unclear or insufficiently detailed.

The approach will be cool and unemotional and all communication with the analyst will be respectful and purposeful. That’s what works best. The initial response to an unsatisfactory draft should focus on identifying the specific issues, presenting the evidence to make your case, and suggesting the changes – as few and as simple as possible – that would correct what is wrong.

When the time comes and the vendor is given the chance to review the draft on the telephone with the analyst, there will usually be a strict 30 minute time slot. That’s all you will get. So the AR professional will insist that you practice the call, not least to ensure that you can cover all the important points in half an hour. And remember what you need is facts not opinion to make your case and evidence, evidence, evidence.

If the response still isn’t what it should be, the 50c barber’s advice becomes even more valuable.

The next step of the process is relatively simple, but it needs to be executed with precise and measured judgment. The sequence of actions involves alerting the analyst to your continuing belief that the company is not being represented fairly, copying in the analyst’s manager, and putting forward another formulation or draft section that may satisfy both the analyst and the company.

It demands tact, diplomacy, and a realistic understanding of exactly where and how far to push.

If even this fails, though, the last option is to embark on the formal escalation process each of the research and analysis organizations offers for disaffected vendors.

Again, the key to success – even at this late stage – is to work with the facts and substantiate each point with verifiable evidence.

Don’t get ruffled. Don’t let it get personal. Don’t fight to win every point, if there are just two or three that really matter to you and your prospects in the marketplace. Leave the analyst and the research organization room to back down gracefully and often they will.

Keep it in perspective

Sometimes a 25c haircut is going to be unfixable. Sometimes an ugly analyst report is nothing more than an accurate reflection of a company that’s had a bad year, has failed to prepare properly, or has no good story to tell.

Even the barber that fixed 25c haircuts must sometimes have had to tell a new customer: “You’re gonna have to let it grow back a while. Then come to me and we’ll make you look great.”

But mostly that guy did a great job of putting the 25c cuts right. And most draft assessments can be rescued, with the right techniques and a sharp pair of scissors. If you’re staring in the mirror and thinking you’re not going to want to go out in public, it’s probably well worth crossing the road to seek some expert help.